Posted on October 7, 2018 by debdavemason

Posted as part of Inktober – October 2018 – part of my Pick and Choose History of Courtenay Street, Kennington and Lambeth: 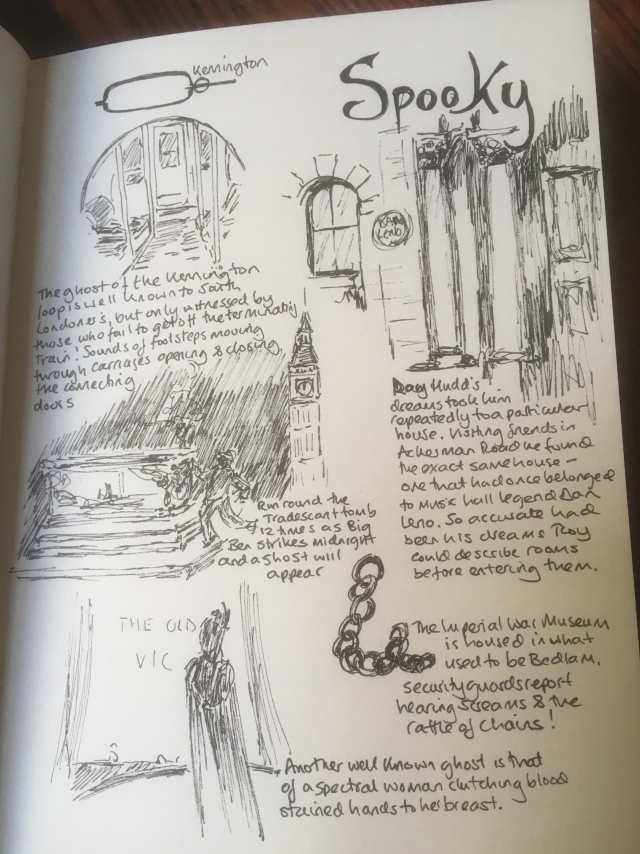 Spooky Lambeth for Halloween. Featuring two of Cheryl Newey’s favourite south london ghosts – the ghost of the Kennington Loop and the ghost of the Old Vic! The ghost of the Kennington Loop is well known as a story for South Londoners, but only those who fail to get off the terminating train will have experienced it. As it goes into the loop sounds of footsteps are heard moving through the carriages opening and closing the interconnecting doors – so remember when they say ‘all change’ – get off the train! I discovered a fascinating story about the entertainer Roy Hudd – he had a recurrent dream in which he walked up to and then into the same house over and over – he could describe the place in detail, but it wasn’t until he visited some friends living in Ackerman Road in Brixton that he discovered that the house was real and had once been the home of fellow performer, music hall legend, Dan Leno. So precise had been his dreams that Roy could describe each room before he entered it. There is a Lambeth legend that if you run twelve times round the Tradescant tomb (now in the Garden Museum’s garden – once the parish churchyard) whilst Big Ben strikes midnight, a ghost will appear. Sadly I only found this out after Big Ben was silenced for maintenance. Working the occasional late shift for weddings I would have had opportunity to try this out. Ah well, just 5 years to wait! The Imperial War Museum is housed in what used to be Bedlam (the main London insane asylum) and it is said that security guards report the sounds of screams and rattling chains. The Old Vic has, appropriately, a female ghost. She is seen clutching blood stained hands to her breast – whether this is the means of her demise or just a reprise of her best performance as Lady M has yet to be determined – perhaps a job for the Most Haunted team and Dennis Acora? This is just a small selection of the many fun ghosts and hauntings of Lambeth! (I’ve even had my own poltergheist but now exorcised).

“Spooktastic!! There’s also Lilian Bayliss and Emma Conns at the Old Vic. Apparently, the aroma of frying sausages can sometimes be smelled in the auditorium during a performance, and it’s said that it’s Ms Bayliss enjoying the show and cooking her favourite supper!”