Posted on October 7, 2018 by debdavemason

Posted as part of Inktober in October 2018 – part of my Pick and Choose History of Courtenay Street, Kennington and Lambeth 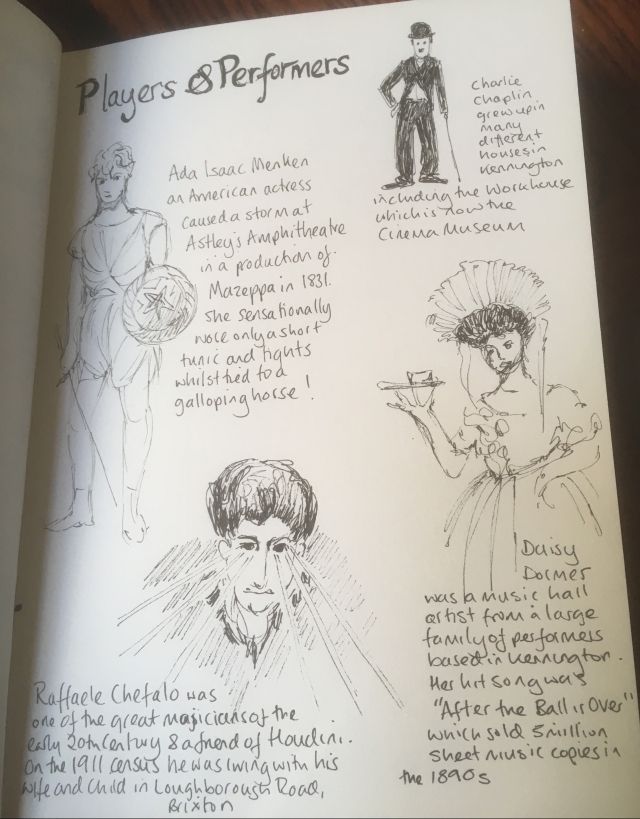 Players & Performers. There may be a second part to this! There are many players and performers from Lambeth but here are a small selection: Charlie Chaplin famously lived at many different addresses in Kennington, including the workhouse – the building is now the Cinema Museum which is threatened with closure – do please sign the petition here to help keep it open! Here

Back in 1831 American actress Ada Isaac Menken caused a storm in the production ‘Mazeppa’ dressed only in a short tunic and flesh coloured tights she was tied to a galloping horse! Daisy Dormer was a music hall artiste married into a large family of performers based in Kennington – her big hit was the song ‘After the Ball is Over’ which went on to sell 5 million sheet music copies in the 1890s! (there is a block of flats named after her in Brixton).

You can here it here

Raffaele Chefalo was one of the great musicians of the early 20th century and a friend of Houdini. On the 1911 census he was living with his wife and child in Loughborough Road, Brixton.