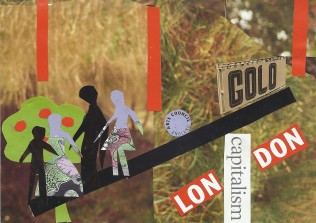 There has been a lot of talk about re-balancing the economy to diminish the dominance of London and boost the ‘regions’ – forgetting of course that London is a region!  We have particularly heard about this in the arts and the ROCC Report – if you read it thoroughly, it gives a good view of the situation.  A lot of the discussions around this re-balancing have taken the starting point of limited financial resource – no more money – and ignored the possibility that actually there is money – you could just take a bit more off the rich – for example!  Also that investment in the arts brings a good return – I think I saw a figure quoted of every pound invested brings a return of six back – so you’d actually have more money for the other things we are supposed to be cutting back on if you did invest in the arts!  Even so this rebalancing needs to be seen as that – a tricky balancing act – not a see-saw.

It also has to be recognised that one of the reasons that London sucks up so much of the arts cash is that it is home to many national institutions, galleries, museums etc, which would just eat up more cash if they were relocated elsewhere.  Accepting that protecting our cultural heritage and keeping it free as a public resource, is accepting that these institutions continue to need funding.  However that does not mean that to rebalance things we need to create new fixed galleries and museums elsewhere.  This is not a competition between who has the largest and best buildings, opera company, theatre company.  What we are trying to do is feed the ecosystem – re-invigorate the habitats that have been neglected.  This means investing in grassroots, regional and touring organisations, and in projects such as Creative People and Places so that culture does not centralise into metropolitan areas (as it has done historically – which is why we have the situation we do in London) but gets out to as many people as possible.  It is not just about the North, but about rural Cornwall, rural Lincolnshire, Northumberland – not just Newcastle.

But we don’t just have a regional imbalance.  We also have gender imbalance and ethnic imbalance and other imbalances that need to be addressed.  Diversity benefits us all, but currently it is best found at the grassroots (the place of least investment) and in the smaller scale organisations.  These are the types of projects and organisation at most risk from funding cuts, where cutting what might seem a small amount of money, or refusing a project grant can make the difference to that project happening, or the organisation continuing to be able to do work.  I have yet to meet anyone working in the arts who is not also working to make their organisation more diverse, to give more equal opportunities, to attract people from the widest range of backgrounds – and yet, 40 years after sex and race discrimination legislation it seems we still have a long way to go.

A lot of us are working away at the bottom, and in the middle and a little bit at the top.  But right at the top, on the boards of directly funded Government organisations, there is much less diversity than one might expect.  DCMS makes around 400 direct appointments to government funded organisations.  It gets one of the best reports on its appointment process from the Government auditor of such things.  Yet the fact remains that the balance is not there: if you look at just the arts and culture Executive Non-Departmental Government Bodies – the proportion is 66% male, 34% female and 87% white.  Something, somewhere isn’t working.  Given that DCMS are considered to be doing a ‘good’ job here – what are other sectors like?  Recent appointments (over the last year) have seen the gap narrowing – but not enough to redress this balance:

Unless those proportions are reversed the status quo will not alter in favour of 50:50 male/female.

A commitment to 50:50 male:female government appointments by 2020.

A commitment to a better ethnic balance in government appointments by 2020 (given the current situation it might be a lot to ask for 50:50 but perhaps we could go for 60/40 and see where we land?)

We can all do our bit for better diversity, and equality – and the Government can lead the way – let’s make it happen!

Note on the stats:

There is no published data on equality and diversity of Government appointments (so much for transparency).  For the Executive Non-Governmental Bodies I used the DCMS list of organisations, for the sake of time I did not look at gambling or sports bodies.  I then looked at the websites or each organisation and their list of trustees/board/council members, where no photos were available I googled the individuals to check ethnicity/gender where it was not clear.  (I did this on 10 February 2015)

This is not a scientific way of working I appreciate – however there is the information and whilst it may be challenged that not all these boards are completely appointed by Government – the stats still stand – that is their make up – those are the appointment/reappointment figures.  It is a shame that the Government itself has not made a commitment to audit and publish equality and diversity figures for all its

appointments – but that is another story!