This page is for the cast and crew of Julius Caesar to more easily access background resources and information that might be useful – it’s mostly a series of links:

Here’s the official Southside Blog – I am hoping all the cast and crew will contribute something: http://southsideplayers.wordpress.com/category/julius-caesar/

Here’s the link to the Today programme clip

2nd up some information on the Battle of Phillipi  http://en.wikipedia.org/wiki/Battle_of_Philippi

If you are one of the many who die in Julius Caesar you may enjoy this:

Please note that although I have been a proponent (as some of you know) of the Yves Klein blue thing I won’t be asking anyone to do that one – or for that matter point no. 5!

Here’s another one – you have to sign up and then they send you an access link to a wide variety of interviews and blogs about Shakespeare:

I was surprised how much I enjoyed this factual tale of army life now.

And if anyone is suffering from stage fright, here’s something Mr Rossi found posted on twitter:

Re Casca’s reaction to the storm and reporting of lion in street – here is a Guardian piece about reports on twitter during this summer’s London riots of a tiger in Primrose Hill that had escaped from the zoo:

Map of how to get to the bit of the school you need to be in!  Also for Caterpillar rehearsals – just walk PAST the main gate down Boundaries Road, go under the bridge and the Caterpillar Nursery is just there on your right. 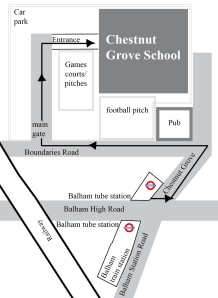 and donated by my friend Cheryl:

She chops chips in a chic fish and chip shop

1 Response to Resources for Julius Caesar