Like an episode of QI – all the Gs in Cardigan Street

Posted on October 8, 2017 by debdavemason

Following on from yesterday’s post – here is another #inktober drawing this time based on Clowes’ recollections of Cardigan Street. He was writing in 1916 and like an episode of QI they all seem to begin with the letter G: goats, gypsies and glassblowers! 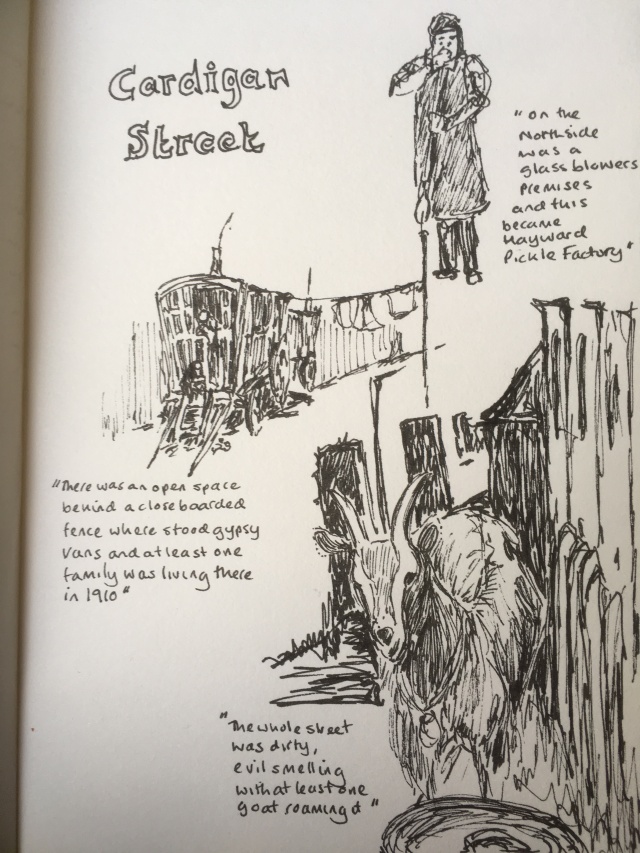 “New Cardigan Street was created in 1913-15 the old street was narrow with mostly 2 storey cottages. There was an open space behind a close boarded fence where stood gypsy vans and at least one family was living there in 1910.

On the north side was a glass blowers premises and this became Hayward Pickle Factory. On the whole the street was dirty, evil smelling with at least one goat roaming it.”

He goes on to ponder on the the goat, saying that he feels there are less goats in London than there used to be and wondering if this was to do with the arrival of motor transport. Goats are often used as companion animals for horses and so Clowes’ speculates that as the stables and mews full of horses, carriages, carts and cabs disappeared, so did the goats! Except apparently in Cardigan Street. Although there was still a stables at the bottom of neighbouring Courtenay Street in 1911 and a number of smithies around the area so perhaps the goat of Cardigan Street still had a job to do!

Vauxhall had been a centre for glass-making since the beginning of the 17th Century and Glasshouse Walk (near Vauxhall/Spring Gardens) marks the site of the plate glass works set up there by Sir Edward Zouche.